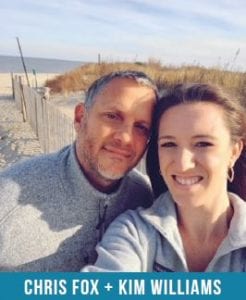 Got a hankering for Maryland style seafood? Can’t get enough crab cakes? Do you love to imbibe bourbon? Well, have we got the restaurant for you! 495 Chesapeake Eats is a Rockport jewel named after the capital beltway that runs through Maryland, Virginia, D.C., and the Chesapeake Bay region. So, it’s no surprise their signature dish is jumbo lump Maryland style crab cakes, which makes their cuisine and their restaurant positively unique on the Texas Gulf Coast.

Chris Fox, the chef/owner of 495 Chesapeake Eats, is from the Maryland Bay area. He has been working in the industry since age 12 and once worked as a hot dog vendor in D.C., a bartender in Maryland, and a busboy and pub owner in Annapolis. In fact, Chris has owned and opened six eating establishments and still owns Foxboys Hospitality Group in Annapolis along with his younger brother, Andrew. Chris relocated to Texas in 2015 and shortly thereafter to Rockport.

Chris’ strengths are both front and back-of-house, as he can handle high volume in the kitchen, in the restaurant, and is very well-rounded in restaurant management skills from craft-cocktail and bar tending, to kitchen operations, and high end whiskey selection.

Like every good pairing in the kitchen, this restaurant business has one too. In this case, Chris’ fiancée, Kim Williams, also has an extensive resume and has worked at Jack Daniel’s Bar and Grill in the Auberge du Lac Casino, tended bar throughout Lake Charles, LA, and participated in the Grand Opening of the Golden Nugget’s Blue Martini. She moved to Rockport in 2016 and began working with Chris after Hurricane Harvey.

The rest is romantic and gastronomic magic. Kim feels most at home behind the bar and says that she thinks their signature dishes are their Brussel sprouts, skillet fried chicken, and their huge Prime Rib on Thursdays.

Kim’s favorite dish is: Anything she doesn’t have to cook.

Another secret to 495 Chesapeake Eats’ success is the fact that their kitchen has two restaurant hood systems which allowed them to add a wood fired grill, another unique draw in Rockport eating establishments. Other ways they distinguish themselves are by serving Orange and Grapefruit Crushes, a popular mid-Atlantic cocktail, and allowing customers to bring in their own freshly caught fish or cut of steak and they will cook it for you in the style of your choice.

Chris says, “A few dishes that separate us from typical Texas coastal dining are our fresh North Atlantic Cod fish n’ chips, and North Atlantic fresh jumbo sea scallops. We like to separate ourselves from a lot of Texas style seafood establishments by not focusing on fried seafood, and more on fresh grilled fish that’s not just from this region but around the world. We regularly do specials like Alaskan halibut, Chilean sea bass, fresh yellowfin tuna, Faroe Islands’ salmon, etc.”

Chris cites his early cooking inspiration as his mom’s Maryland Fried Chicken, excellent area crab cakes, and cream of crab soup, plus a chef-catered yacht ride in the Chesapeake Bay with his dad where he tasted the best honey ham of his life. A fan of simplicity and uncomplicated menus, Chris says, “… that food and beverage is not a science, it is art, and in art there is no right or wrong.”
Two of Chris’ favorite things about owning a restaurant are the opportunity to meet new people every day and the exceptional staff he has hired in Rockport.

Kim says, “Chris is an amazing bartender and the cocktail program in each of his establishments is beautifully executed and passed down to 495 Eats. Chris’ passion for bourbon has also led us to offer one of the largest high-end bourbon collections in the coastal bend!” Kim is rightfully proud of the cocktail that she designed as well, the Zacapa Pina!

Are you feeling the same East Coast Mid Atlantic food cravings we are at the moment? We’re in luck, because 495 Chesapeake Eats is open for business every day but Monday at: 1008 E. North St. Rockport, Texas 78382. Check them out at: https://www.495ceats.com/