It wasn’t only Texas’ people who were cold during the February freeze! Imagine you are a little Red Drum fish happily swimming along the coastal estuaries near Rockport minding your own fishy business, when suddenly your way is blocked by ice! This isn’t the Arctic you think to your fish self…or is it? Texas’ big freeze took a toll on our fish populations all along the coast, of which Texas has 3,359 miles! Sadly, an estimated 3.8 million fish were killed as a result of the arctic weather.

According to the Texas Parks and Wildlife Department, “This fish kill consisted of at least 61 species. This includes species like silver perch, hardhead catfish, pinfish, bay anchovy, and striped mullet. While not sought after by most anglers, non-game fish are ecologically important, providing food for larger game fish as well as adding to the overall diversity of Texas bays.”

Biologists from the TPWD sampled areas, counted, measured and recorded dead fish within that area, using standards set by the American Fisheries Society.

HOW DO WE SAVE THE FISH?

Another deadly freeze occurred in 1983 and before that in 1951, but luckily Texas has learned a lot about fish recovery since then! For instance, right before the freeze, the TPWD issued a temporary closure to saltwater fishing along the coast to protect resources during the actual freeze. Fish in shallow areas must seek deeper water to avoid freezing, but there they become more sluggish and prone to capture as a result. Is it even fair to catch a dozy fish? “The high mortality that a freeze can cause may deplete fish stocks for years,” said Robin Riechers, director of TPWD’s Coastal Fisheries Division. “Protection of the surviving fish during the few days when they are especially vulnerable to capture would likely shorten the time period for overall recovery of coastal species, especially spotted sea trout.”

One way all of us can help with repopulation is practicing more catch-and-release. Next time you are out on the water, consider limiting your catch and only keeping fish that well exceed the length requirements.

The Coastal Conservation Association began in 1977 concerned over the status of the Texas Red Drum fish. Their mission is “…to advise and educate the public on conservation of marine resources through conserving, promoting and enhancing the present and future of our coastal resources.” John Blaha the Assistant Director of the CCA said, “…we gotta get together, or we’re not going to have this fish in the future.” Blaha has been with CCA for almost 20 years, and he began volunteering in 1990. “I wanted to be part of something that made a difference, and I felt that was my calling,” Blaha said. “There are a lot of wonderful volunteers, wonderful people in general, and they all have a passion for ensuring this resource is taken care of, not just for this generation, but future generations.”

From historical freezes it is possible to estimate how long certain species of fish took to recover in population. For example, based on gill net catch rates, Spotted Seatrout recovery took 2-3 years to reach pre-freeze levels after the 1980s freeze event. TPWD will also be evaluating an increase in Spotted Seatrout production at its coastal fish hatcheries to aid the recovery efforts. What can you do to help? “As fish stocks recover from this freeze event, anglers are encouraged to practice conservation by choosing to catch and release fish or to harvest only those fish they feel they need to take home to eat. Conserving fish now can only aid in a quicker recovery.”

The conservation, protection, and maintenance of our fishing habitats is important to Texas’ economy, fishing industry, and tourism! And to the little Red Drum swimming along Rockport’s coast who suddenly finds himself caught on your hook. So, don’t be a cold fish, let him go and help his species to rebound faster! 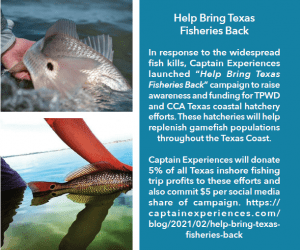