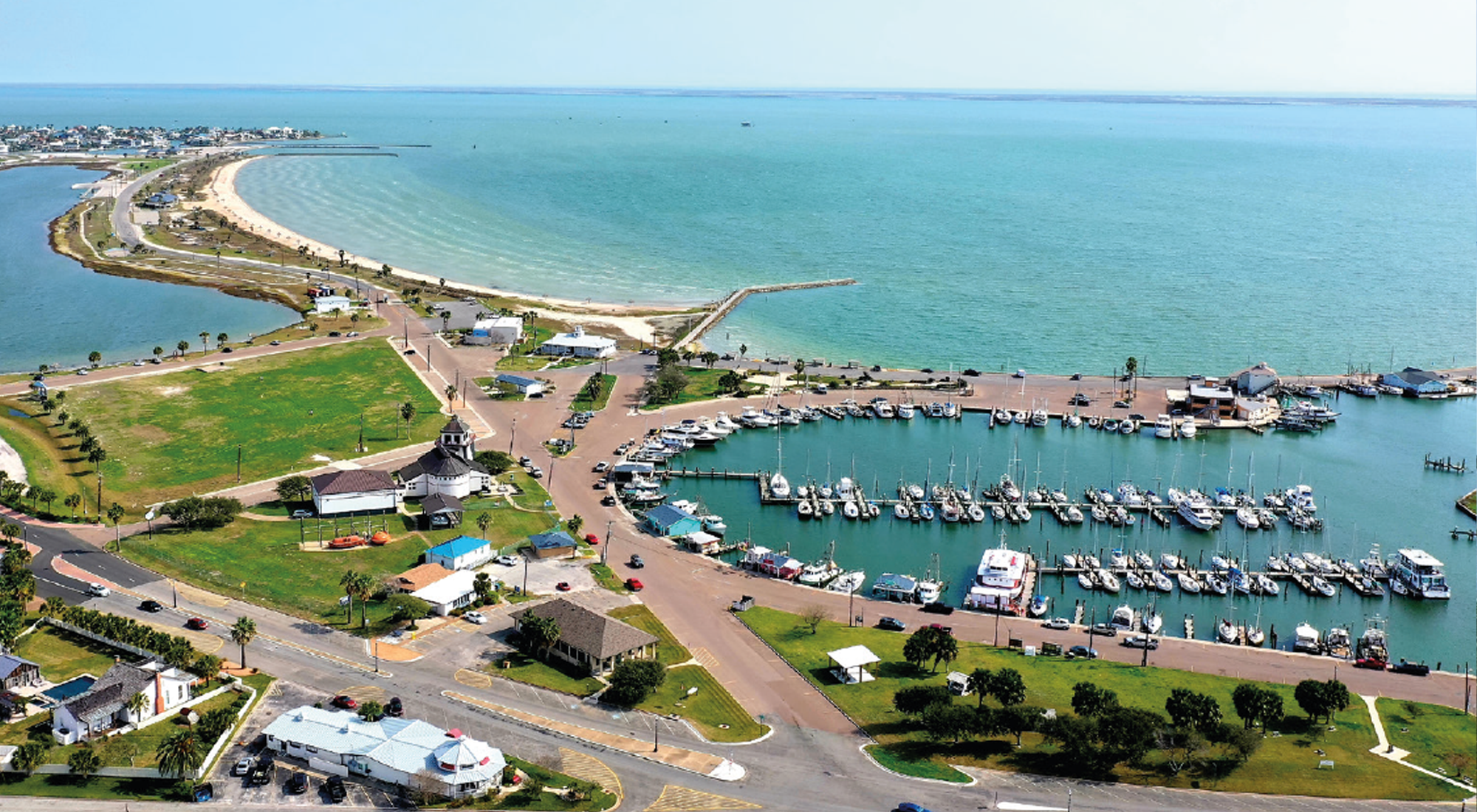 No one wants to be tried by catastrophe, but inevitably, destiny has some surprises planned for us all.

In the case of Rockport, Texas, on Friday August 25th, 2017, hurricane Harvey, a category-4 storm, exploded over the Texas Coast, decimating large parts of the town. Being the resilient people they are, the town residents rallied together and have accomplished incredible amounts of reconstruction and even marked improvements over pre-Harvey Rockport.

We spoke with Diane Probst, President and CEO of the Rockport-Fulton Chamber of Commerce to discuss the upside of post-storm development. Diane says, “Working for a community for more than 30 years, and experiencing a tragedy such as a hurricane, you learn how to guide, to survive, and to become stronger because of it all.”

Diane was grateful that the Chamber itself had a crisis plan prepared for just such emergencies and was able to jump into the recovery effort quickly. The Chamber building itself escaped serious damage, suffering only 7 blown out windows and re-opened by the following Monday! Diane served on the Emergency Operations Center Team, providing vital updates on business activity, while out-of-town charitable foundations sent two former City Managers who formed a team of 8 people that became the Long-Term Recovery Team. The Chamber’s self-stated purpose is to work with local businesses, individuals, and government to promote commerce and tourism with an eye to maintaining the environment. Harvey was the catalyst for a super-sized effort on behalf of Diane and her staff to help their community rise again from the destruction of Hurricane Harvey. 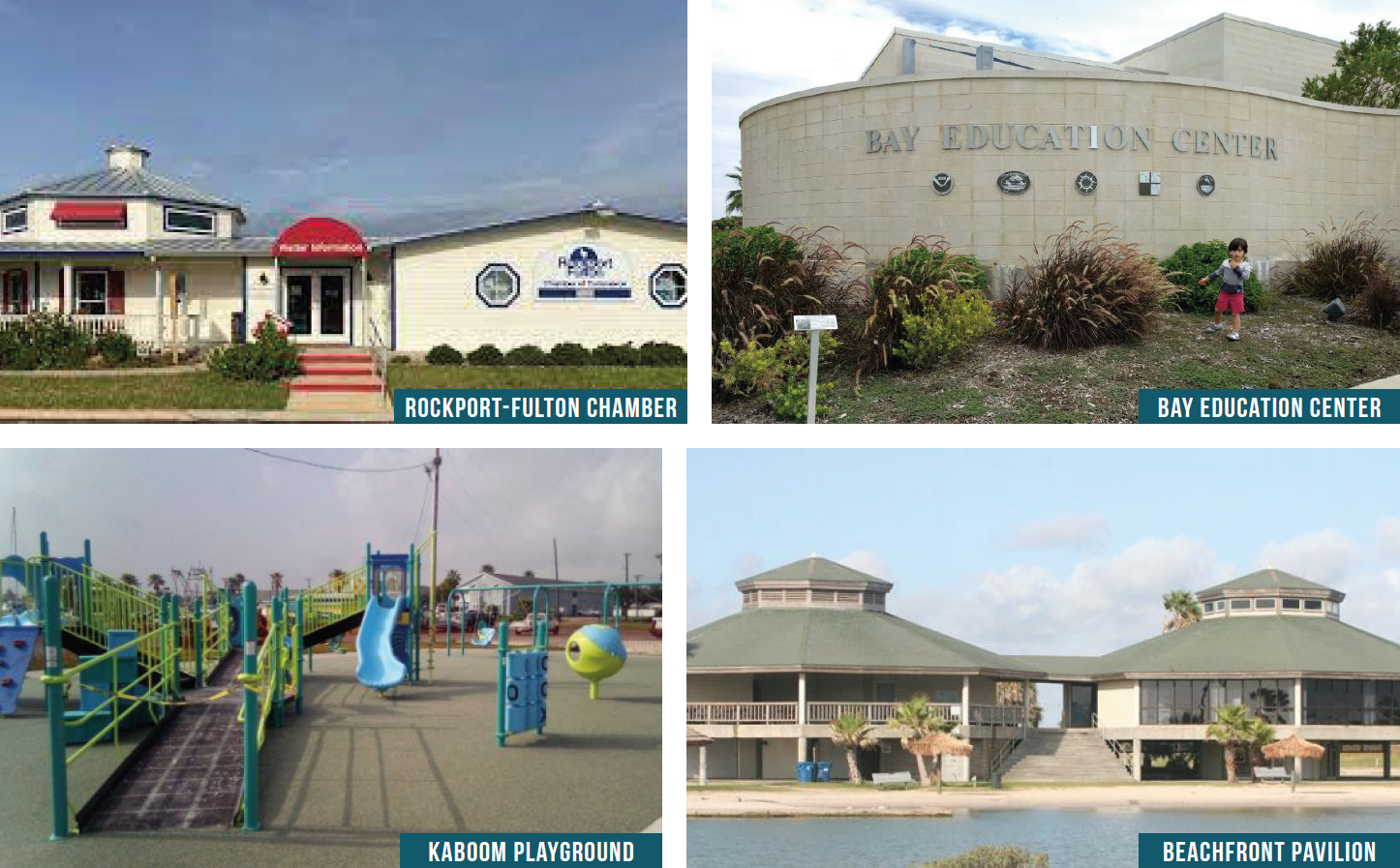 To everyone’s surprise, within 6 weeks of Harvey, Rockport put on their annual SeaFair Celebration amid the wreckage of their town. Despite the devastation, SeaFair brought people to Rockport in droves, both to help, to show support, and to join in celebrating the strength of its people. While providing an urgent reason for everyone to work together, SeaFair also gave locals an opportunity to jump start reconstruction efforts and provided hope that everything would eventually be okay. For 41 years, SeaFair was a carnival-like festival including fun, food, crab races, music, boat shows, a crafts market, and hundreds of gallons of gumbo. In 2017, it was a symbol of survival and a community’s declaration that Harvey would not defeat them. Bands like Ace-in-the-Hole played for free, people donated goods and services, and townspeople toiled together to pull off this first post-Harvey event.

Next up, Diane took businessman Jeff Hunt up on a favor, which ultimately got George Strait involved and created the Find Yourself in Rockport-Fulton campaign, using ‘Back to Being Me,’ a Strait hit, as its theme song. Strait recorded 3 separate radio spots to encourage Texans to help out in Rockport and everyone from architects to city planners, to landscapers, and individual families heeded the call and rushed in to offer their unique skill sets. Rebuild Texas, the Michael and Susan Dell Foundation, and the Meadows Foundation provided over $100,000 to distribute to local businesses to keep them afloat and help them rebuild.

With a little help from Ellen DeGeneres, Rockport-Fulton High School got a new state-of-the-art gym to house their girls’ volleyball team. 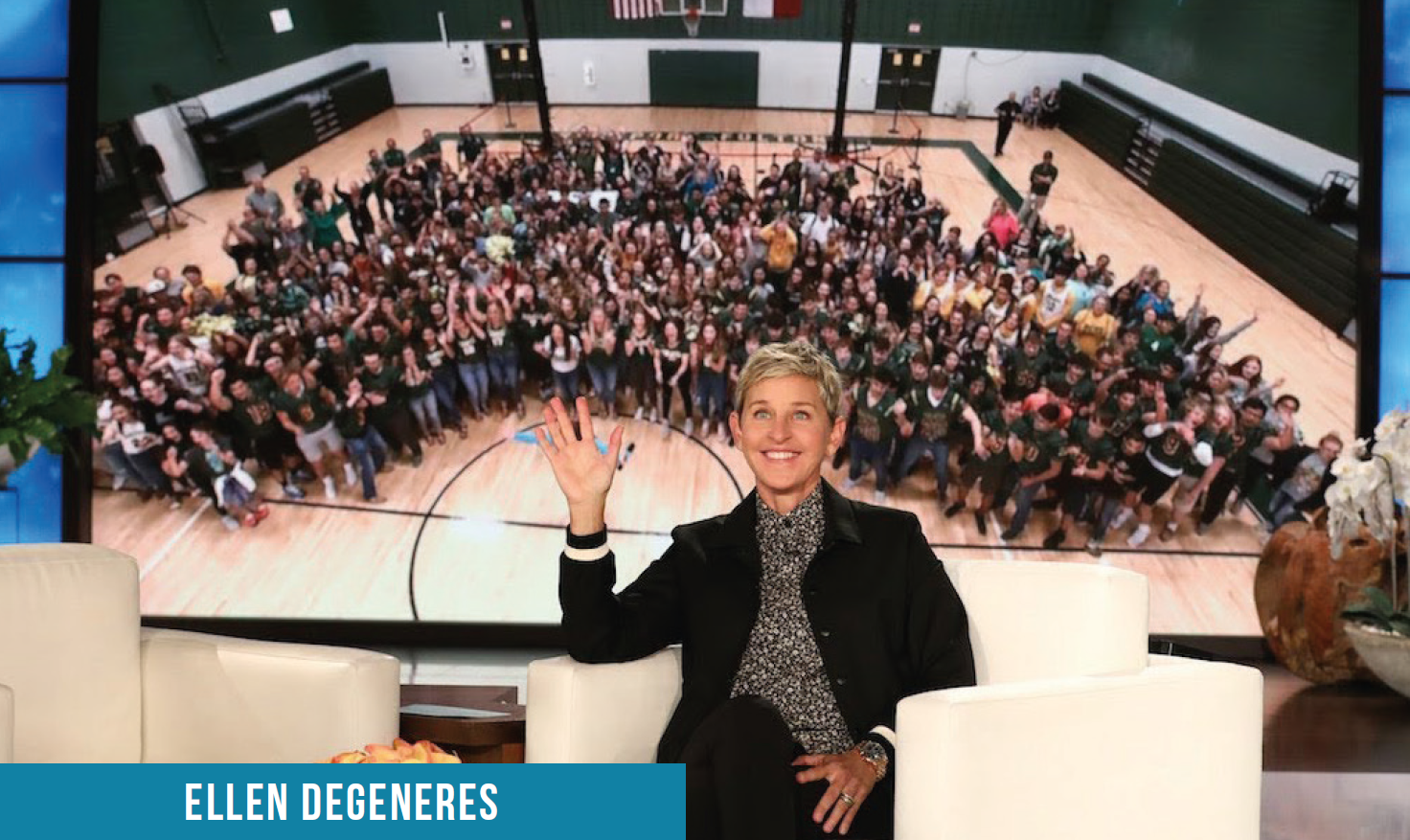 Though huge strides have been made in growth and recovery efforts, Rockport is determined to maintain its charming fishing village character, its small-town ambiance, and the heart and soul of its residents and their families. So though improvements and wonderful additions to the community are Harvey’s legacy, the essence of Rockport has not changed and its people, proud of their history, are determined to keep it the special community by the sea that it always was.

We have highlighted some of the new and improved efforts below, but there are plenty more hidden blessings from Harvey like a Workforce Development Center, the RCAD Cultural Interface harbor sculpture by Steve Russell, Cedar Bayou, drainage and shoreline resiliency projects, bulkheads, non-profit buildings, the Key Allegra Bridge, multi-family housing, monolith signage, power polls, the new Art Center, plus the Rockport Conference Center, etc. Some are done and some are only envisioned, but have no doubt they will all be a reality. Harvey came and went, but Rockport and its people are here to stay.

One of the most important recovery efforts was Rockport’s Memorial Park. Having only a single park, its destruction meant there was nowhere for jogging, for Little League Baseball, tennis, disc golf, soccer, strolling, etc., and not even a single playground for local children. From this tragedy came an anonymous foundation that paid over $1,600.000 to create a new Memorial Park that included 2 brick air-conditioned concession stands, 4 regulation-size baseball fields, a skate park, new restrooms with air conditioning, new grandstands with comfortable shaded seating, exercise equipment, LED lighting and full landscaping. This vital part of the community now represents the generosity of spirit and positive attitude that emerges in the wake of tragedy.

A Rockport-Fulton High School teacher’s daughter, Sydney Macha, contacted a producer at The Ellen (DeGeneres) Show and told them that their high school gym had been decimated by hurricane Harvey, leaving the varsity girls’ volleyball team with nowhere to practice or play their senior year. Ellen had the whole Rockport girls’ Volleyball team and coaches on The Ellen Show, surprising them with an announcement that she was donating $1,000,000 and teaming up with Lowe’s Gives Program (Lowes provides the labor through their Heroes) to rebuild their gym. The state-of-the-art gym took 2 years to complete and now boasts seating for 1,000, a projection screen, a scoreboard, a regulation size court, and is home to the Rockport-Fulton Girls Pirate Volleyball team. They recently broke ground on the project – click here for the news report. 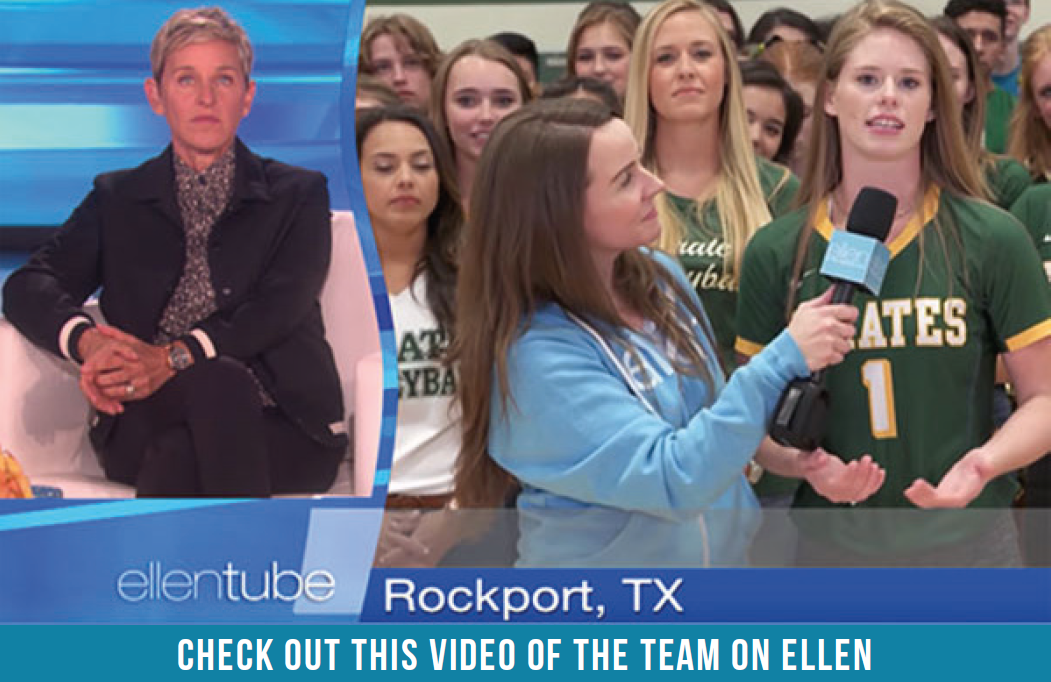 Harvey destroyed 7 hangars at the Aransas County Airport along with runways, utility areas, lighting, etc. Now $4,500,000 have been fully funded to rebuild the hangars, utility barns for equipment, and refurbishing 90% of airfield and hangar lighting!

Before Harvey, the Fulton Convention Center was housed in an old wooden dance hall on the Harbor. The Fulton Pier, a vital fishing location for the whole community, was blown away during Harvey. FEMA funds only to rebuild, not improve, so in stepped the Yeti Corporation and the Texas Department of Parks and Wildlife. $3,200,000 later there is a brand-new metal Convention Center that seats 500 people with a large open space for public events, and a new 1,200-foot pier complete with night lighting!

Even before Harvey, Fulton did not have a dedicated playground for kids, but thanks to the generosity of the Kaboom Corporation, Rebuild Texas, and 200 volunteers, Fulton Harbor is now home to a vibrant new playground. Kaboom steps in after natural disasters and helps build places to play. They consulted local kids to determine what structures they most wanted, and the result is a turquoise and light green padded playscape, ramps, 2 slides, swings, teeter totters, and a shaded seating area complete with a blue alligator sculpture.

Hurricane Harvey blew all the beach sand into the bay and damaged all the beach structures at Rockport Beach. Thanks to government grants, Rockport Beach now has 70 palapas lining the beach, a Saltwater and Beachfront Pavilion, all new cabanas and barbecue pits, a Pirate Ship mini playground donated by the Lions Club Women, new benches, lift stations, and thousands of tons of new sand! Along with Rockport Beaches’ Blue Wave designation, there is nowhere better to be on a hot summer day.

Post Harvey, there are now 5 rebuilt bait stands at Rockport Harbor, 2 at Fulton Harbor, and 2 at Cove Harbor. Of critical importance to the sport fishing industry and professional guides, the $500,000 invested in the new bait stands have been key to invigorating the local fishing scene.

The downtown anchor project comprises a new City Hall, a new Courthouse, and thanks to a GLO grant program, Celebration Plaza, a common area and event space. This multi-million-dollar project has been approved and moved through the bond and tax process, so a construction update should be available soon. The new project will be located between Magnolia and Live Oak Streets.

The Aquarium was completely flattened by Harvey and has not yet been rebuilt. However, the new design has been approved, and $500,000 has been funded for the new aquarium, so keep an eye out for the groundbreaking announcement.

The new entertainment/education center, a branch of the Marine Science Institute from the University of Texas at Austin, (UTMSI) was a $475,000 restoration project in collaboration with the City of Rockport, Museum Arts, UTSMI, and the Aransas County Navigation District. It features engaging and inter-active exhibits of coastal wetlands, the story of estuaries, and science-on-a-sphere to illustrate ecological and economic science and sustainability as impacted by global patterns. Fun for kids and adults!

This iconic symbol of Rockport had been a tourist attraction in one form or another since 1957 and had even been recreated in 2012 by artist David Allgood. Harvey killed the crab, and it has taken 4 years, and the efforts of many dedicated volunteers along with artist Joe Barrington to create and erect the new 6,000-pound, power-coated stainless-steel crustacean. This stormproof big blue guy is a pillar to strength that stands near Rockport Harbor symbolizing protection. Truth is though, he is actually green now and not blue!