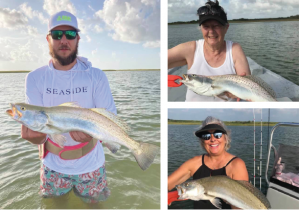 Fall and winter on Aransas Bay, St. Charles Bay and the entire Texas Coastal Bend means it’s time to catch the most sought-after fish in the Gulf – the Speckled Trout a.k.a. the Spotted Sea Trout (not to be confused with Rainbow Trout or Brown Trout, which is another kettle-of-fish altogether.) This season is best for catching big ones because, “In colder weather and colder water, these fish can get up onto the shallows without overheating,” says Travis Wilcox of Coastbusters Guide Service. The largest known trout caught on the Texas shore was in 2002 by Carl Rowland, and it was 37” and weighed 16 lbs. Travis himself has caught trout as big as 31.5” and knows of what he speaks.

Throwing lures is how you catch trout, and Travis recommends using Skitter Walk, or Spook Junior lures in Bone Diamond or Pink Diamond. He also uses Mullet Man soft plastic baits in Dirty Dom or Wilcox PBJ colors that look like baby trout! (Trout must be cannibals!) Trout love live bait too, and in this case, Travis suggests using Croaker. The reason Croaker is so effective as bait is that they actually make a croaking sound that the trout hear and head towards. (Silly Croakers.) As for rods, Travis likes a 7’ medium rod by Corky’s Custom Rods made locally in the Lamar area of Rockport. And you are going to need boots; Travis likes Simm’s Wading Boots because they come with a lifetime warranty. 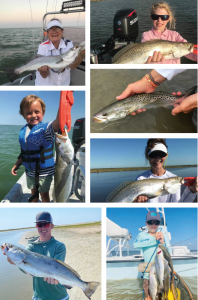 So, now we know what equipment we need to catch these big guys, where do we go? Trout fishing on the Gulf is done by wading and if you watch for mullet jumping you know they are being chased by trout and you are probably in the right area. Trout prefer water between 1.5” and up to 5’ deep. Winter is when the most “Trophy Trout” can be caught, and a trophy fish is one that is over 25” in length. Just remember there is a daily catch limit of 5 per day with only one over 25”.

Trophy fish are usually weighed, photographed and then released, because the big ones produce more babies and keep the supply in good shape. Even in big tournaments, they usually release the fish after the weigh-in. In fact, if your fish dies en route to weigh-in, you can be docked points.

When people refer to ‘Gator Speckled Trout,’ they mean these big guys and though true trout fishers may wait their whole lives to catch a monster trout, on the Texas Gulf they are populous, so let’s get fishing!

Of course, Travis is an amazing guide and can be booked for multi species fishing, but if you want to fish with the Big Trout King, he raves about Jay Watkins (jaywatkins.com), a local guide who specifically fishes only trophy trout.

For bait, Travis says, “using live shrimp under a popping cork,” (which makes a popping sound on the surface, and we already know trout have keen hearing!), “will attract lots of trout, who suck the shrimp off the surface.” It is exciting, and he says you can see the shrimp jumping backwards and splashing when they are being chased by a trout. Doesn’t that sound like fun?

Welcome to giant trout season in Rockport! Book your guide soon so you can take advantage of the cooler waters and the bigger fish. If you are a trout afficionado, you may already have your trout-catching strategies, but if not, then Travis has given you all the tips you need to snag yourself a monster trophy trout.