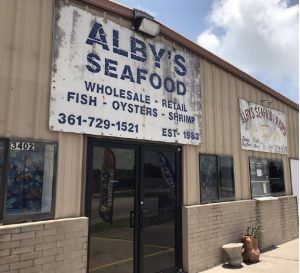 It’s that time again, the season when the best oysters are available, freshly shucked and ready to go! November through April is when oysters can be commercially harvested. And they taste best during these months due to the colder waters. So get ready to savor these succulent morsels fresh from the Gulf!

In the Rockport-Fulton area, one of our favorite places for the freshest, best tasting oysters around is Alby’s Seafood. Alby’s proximity to the Gulf, only blocks from Fulton Harbor, ensures their seafood products are newly harvested and processed to guarantee health and safety. Who doesn’t love Texas’s coastal bounty of ocean cuisine? Here’s all you need to know about our delicious, local oysters for your Fall and Winter meals.

Oysters must have both fresh and saltwater to survive, and it is the mix that determines their flavor. Did you know oysters take on the characteristics of the water they live in? The water determines their minerality, brininess, crispness, richness, etc. The Texas Gulf contains wild-caught Eastern Oysters (a.k.a. Crassostrea Virginica) which thrive because of the Mississippi River emptying into the Gulf, making the water a brackish freshwater mix resulting in meaty, tender, and mild oysters.

Oysters live in reefs and attach to rocks, boats, piers, or any submerged surface, creating a bed. As they grow, they fuse together. Any firm bottom will do, and they can be found from 8 to 35 feet deep. In Rockport/Fulton, the freshwater influx into the bays, estuaries, and shallow ocean water produces great tasting, healthy oysters.

Not all oysters have the same flavor. An oyster’s location (bay/reef) as well as their brine mix determines their taste. In fact, an oyster from Chesapeake Bay is going to taste very different from one found in the Louisiana Gulf waters, even if their water content is similar. Oysters can be called anything on menus, but those names just reflect their locations. For example, Olympia oysters are from Washington state, whereas Chincoteague are from Virginia, Malpeque come from Prince Edward Island, Blue Point from Connecticut, Apalachicola are from Florida, and Wellfleet hail from waters in Massachusetts. But our favorite are the beautiful Texas oysters that go by the simple appellation of: Gulf Oysters.

Are you Team Oyster or Team Clam? Healthy oysters tend to be plump and smell fresh like the briny sea. They have a smooth and buttery taste which aficionados like to “slurp” down. Clams are chewier than oysters and have a more pungent, briny taste. Oysters have a rocky, ridged shell; clams are smooth and shiny.

We love oysters more because they are nutrient dense, healthy, and taste wonderful with lemon, hot sauce, or just plain raw in their shells on ice.

Commercial oyster harvesting season in Texas runs from November 1st to the end of April and there are size limits, quantity limits, and acceptable means of harvesting. The Texas Department of State Health Services determines the sanitary quality of oystering areas and publishes maps of approved locations, so our Texas oysters are always fresh and safe. What we love about Alby’s is that their oysters are always shucked and packaged immediately for freshness and are sold by the pint, quart, or gallon. And Alby’s has been supplying restaurants and retail customers with fresh seafood since 1983 so you know they are doing oysters right!

Oyster restoration is important. In fact, the more oysters there are, the cleaner the water! An oyster can filter up to 50 gallons of water a day, using their shell filters and gills to eliminate sediment. Oyster reefs provide an essential habitat for many recreational and commercial fish species, while oyster reefs themselves can protect the shore from erosion and wave damage. 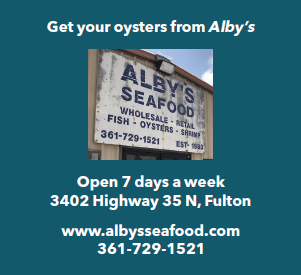 Eating oysters is good for you as they contain ample amounts of calcium, magnesium, iodine, vitamin B-12, iron, and monosaturated fats – the healthy kind, like in olive oil! And if that isn’t reason enough, 6 oysters equal the equivalent of 220% of your daily zinc allowance. And to top it all off, oysters are low in fat and calories.

So, what are you waiting for?

Oysters represent a valuable fishery resource and livelihood for commercial fishermen and are a popular Texas food staple. Commercial oystering in Texas produces 2,700,000 pounds of oyster meat annually, which contributes over $9,000,000 a year to the local economy. And nothing goes to waste with oysters. 100% of the meat is utilized with no gutting or gilling necessary! Oyster shells also have many uses and Alby’s has partnered with the Shell Bank Recycling Program for the Texas Coastal Bend Area, which recycles oyster shells for use in future reclamation projects such as seawalls, reefs, and construction projects.

So now we know where they come from, what they look like, why we should eat them, and how they are beneficial ecologically. But the most important fact to know about Texas Gulf Oysters is that they are yummy. So, you don’t have to wait until March for the Rockport OysterFest to enjoy these delicacies…get em soon. Anyway, you serve ’em, we’ll eat em! Aw shucks!